So we’re missing our favourite spicy chicken take-away during the lock-down…This is a bit of a throw back to a recipe that we posted some time ago but we have realized is a definite winner…..the peri-peri marinade! The longer you store it the better the flavour becomes and it is so easy to make! It only take a few ingredients….and either a food processor or hand blender stick.

So during the lock-down, Pauline harvested her chili bush which had grown out of simply planting a few chili seeds from a left-over chili in her garden……and with the rich reward for a load of chili’s it was time to think of how best to use them.

One of the things that has been whipped up so far are a couple of bottles of the peri -peri marinade……..this can be used with meat, chicken , fish or vegetables to give that lovely bite we have grown to love from peri-peri sauces and marinades.The longer this stands the better the flavour develops …so make a lot and put it away…

Pauline had some left from the Christmas shoot we did for our original post….and used it last night to make a peri-peri spatchcock chicken and cooked it over the coals………it was delish! Rather than a whole chicken you can use chicken pieces….simply cut small incisions through the skin and into the flesh and pour over the marinade. Leave to rest in the marinade to 2-3 hours. Either then roast in an over and during the cooking spoon over the marinade or as we did we baked it in the Webber and half way though the cooking poured over a little more of the marinade.

One of the great things with the marinade apart from the special flavour is that the oil base helps to coat the outside and helps to develop a lovely golden brown colour during the roasting or grilling. 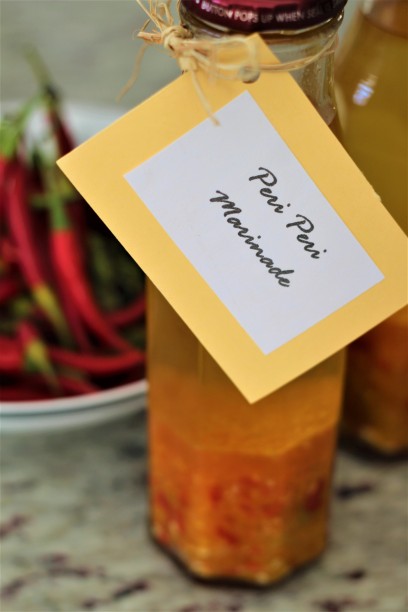 Place all ingredients except the oil and vinegar into a blender.

Whiz to form a chunky paste

Transfer to a glass container and top up with oil and vinegar.

Close the jar and shake daily

It should mature with time.

Published by A Little Bit of BOTH

This is a text widget, which allows you to add text or HTML to your sidebar. You can use them to display text, links, images, HTML, or a combination of these. Edit them in the Widget section of the Customizer.